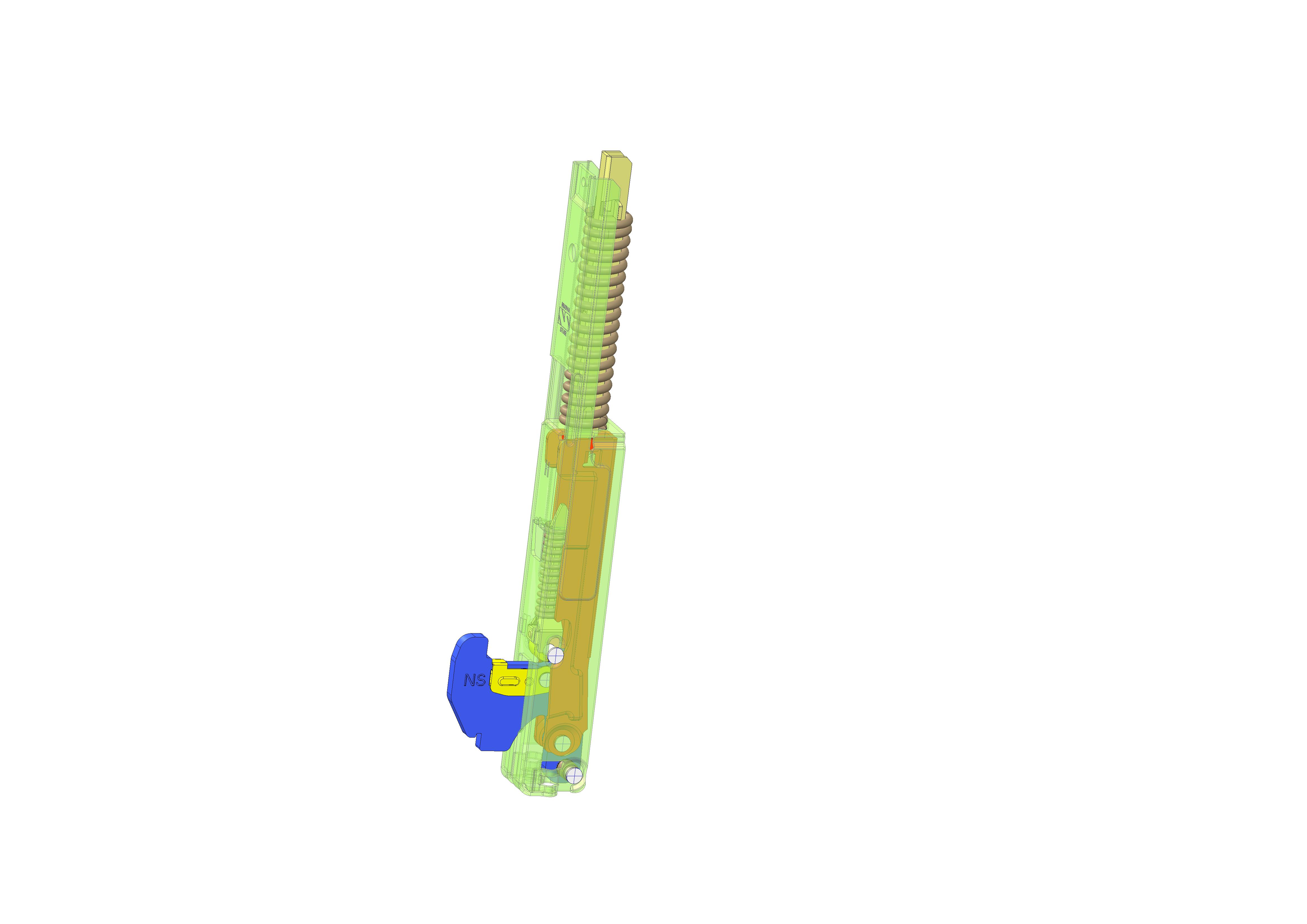 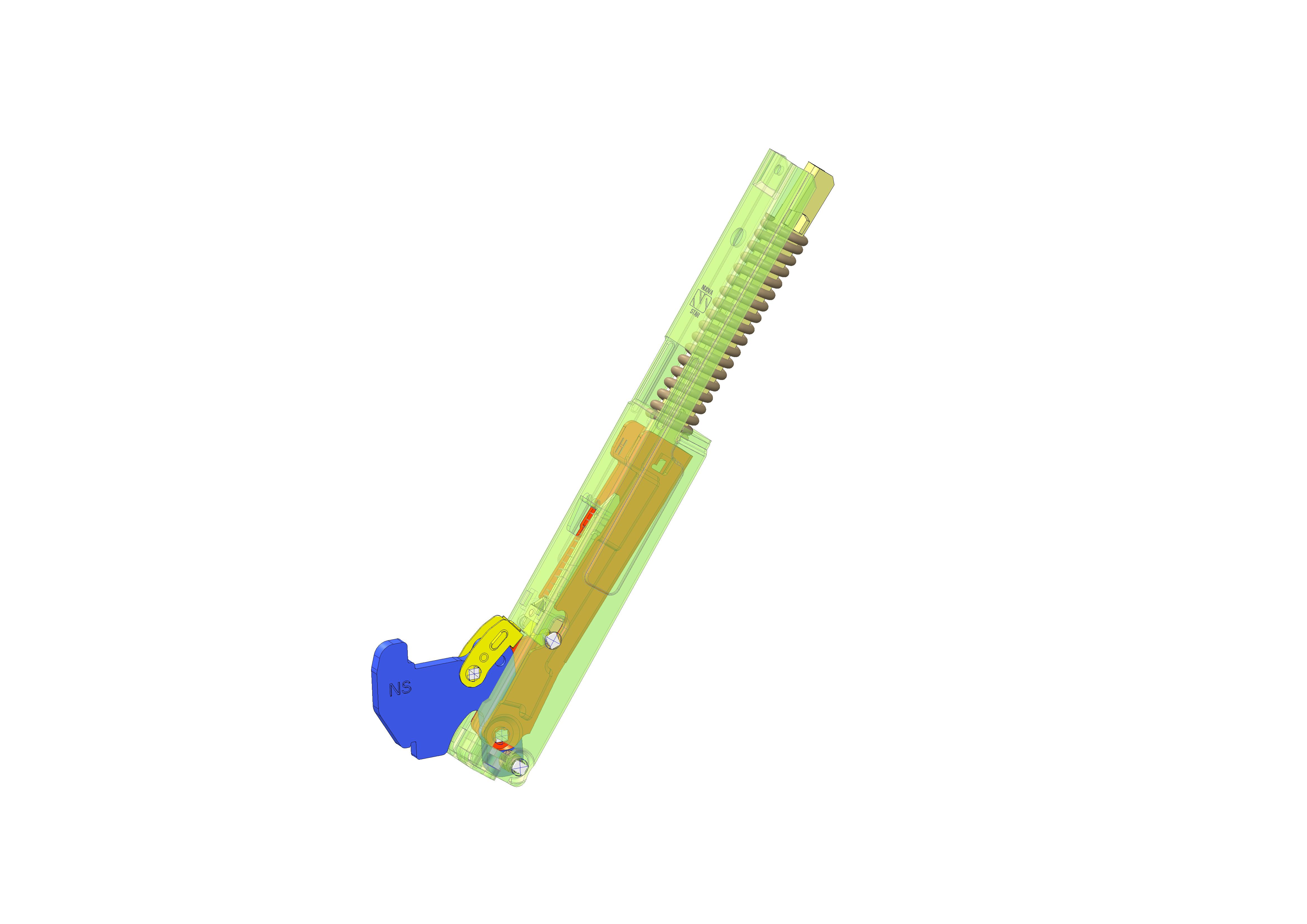 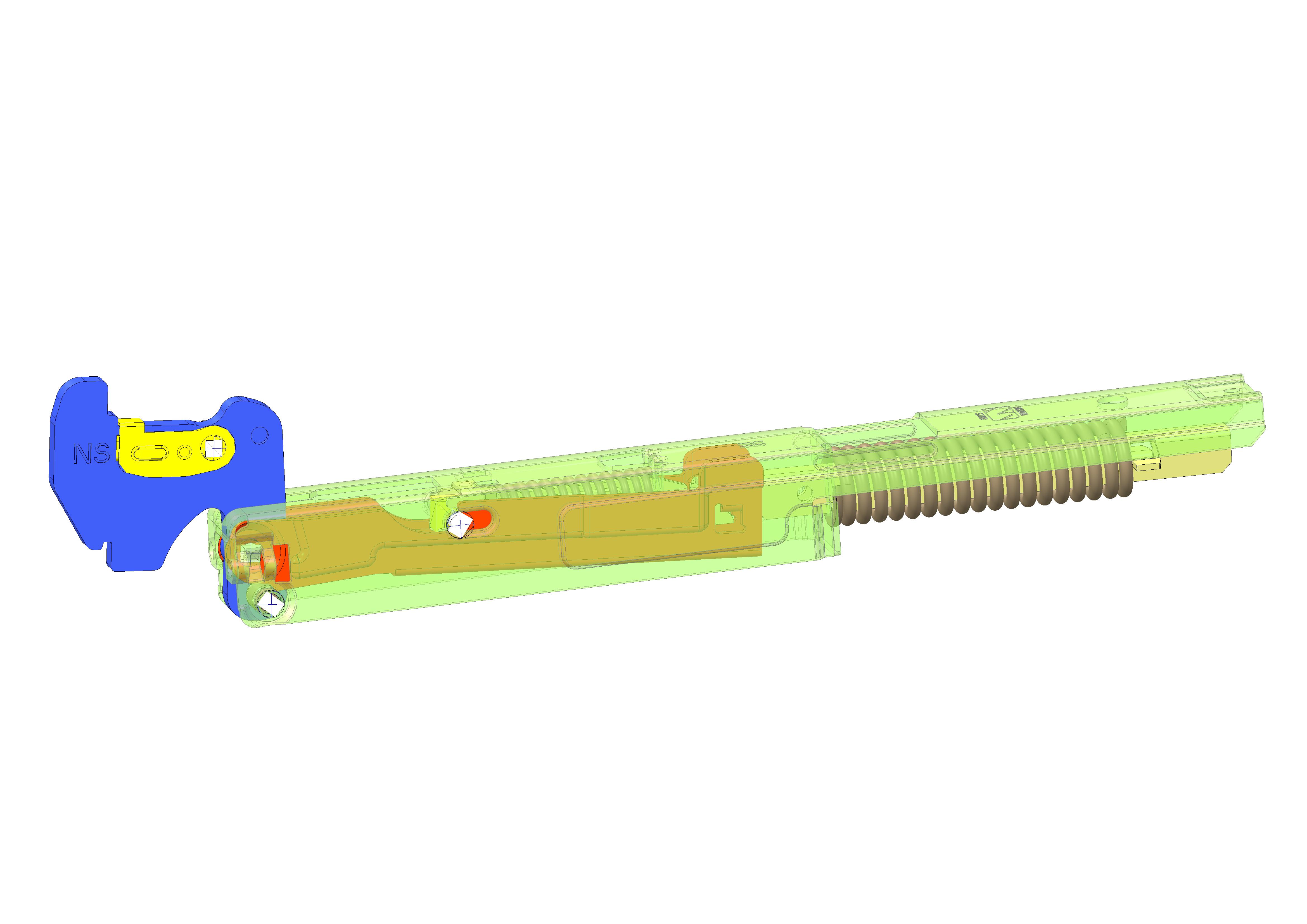 Model 86 is a single fulcrum single arm hinge. This system offers a proper balancing of the door at any nominal operative angle, and an adjustable closing force of the door. The closing torque is obtained trough an independent mechanism which consist of a spring/roller element activated by a cam shaped on the hinge arm. The balancing torque is obtained trough a main spring system.

Limited dimensions allow an easy fitting in any kind of housing with negligible effect on oven aesthetic. Model 86 has been designed to be located inside oven door.

– Balance capability: door balance guaranteed in precise of a door weight deviation of 500 g applied at the same center of gravity

*If the door exceed 9 kg distance between door C.o.G. and hinge fulcrum should be at least 230 mm.

For more information
contact us by writing
a request.

Following notes to be considered as general specifications for all Nuova Star products. In presence of specific requirements customer must share this information at the beginning of the system development. Nuova Star will evaluate specs and requisites and will study the impact on the products and the testing equipment. Final approval must be agreed between Customer and Nuova Star.

Dynamic load: maximum supported dynamic load is evaluated by applying a weight (specific value reported for each hinge in the details) to the central high portion of the door, to simulate balance loss, dropping the door from approx. 25° to the maximum opening position up to three times. No effect on the hinge to be observed.

Closing force: closing force value must be defined by the Customer and must relate to a specific angle.

Operating forces: the operating forces over the entire opening angle have to be agreed between Nuova Star and Customer, particular focus to be considered at the forces applying around the intermediate stop position (grill position) at about 20°.

Mounting arrangement: to be agreed with Customer at the beginning of developing phase.

Hinge Receiver (counter support): hinge receiver and the distance between hinge and counter support are application-specific parameters, to be agreed with Customer at the beginning of developing phase.

Operating cycles: the term operating cycles is defined as the maximum number of opening and closing cycles which, while causing some wear and deterioration in function, still permit the primary function of the hinge (opening and closing of the door) to be maintained. The life expectancy of a standard product is 30,000 operating cycles. If a longer life is required, this must be agreed at   the beginning of. The deterioration in the hinge's performance, after the life test conclusions, depends on the test specification, in particular on: ambient temperature, with independent final position of the manoeuvre or with the final position at the limits of the hinge, quality of the alignment of the door to the front frame, actuation speed, and any other external conditions which might influence the hinge's function. Testing conditions should be defined at the beginning of developing phase including:  - room temperature  - final position in terms of angle and if  additional force have to be applied (87° with no residual force application)  - actuation speed (20 cycles per minute)  - with the door aligned  - with rigid hinge receiverUnder the above normal conditions at the conclusion of testing at 30,000 operating cycles a defect rate degradation of the hinge performances up to 10% in closing force and up to 25% in door balancing force may be expected. Other non-standard conditions than these must be defined at the beginning of developing phase.

Arming' the hinge: the hinge can be supplied in the 'armed' position, ready for assembly. If the hinge is stored in the armed condition for more than 24 hours, this could result in a loss of spring force, the extent of which is somewhat unpredictable and depends upon the main spring. This phenomenon can give rise to unsatisfactory door balancing. On request, we may be able to offer a special design in order to reduce the loss of spring force.

Anti-corrosion: the hinge components are protected against corrosion by a zinc coating at least 5 µm thick. However, some components such as springs, rivets etc. are protected only by a film of oil. Under normal circumstances this level of protection, if the hinges are subjected to a salt spray test for 24 hours duration at ambient temperature of approximately 35°C in relative humidity of approximately 85-90%, with pH value from 6.5 to 7.2, can lead to the formation of small rust spots no bigger than 2.5 mm². On request a higher degree of protection can be provided.

Identification: standard identification for similar part numbers which differ only in the spring force is a letter or number marking on the arm. Alternative option might include dedicated colour applied to the spring. Bar Code / QR matrix marking (laser printer / label) might be optionally provided.

Functional tests are oriented to identifying the adequate hinge that fulfil the customer requirements in terms of perceived quality during opening and closing action. To enable Nuova Star to carry out these tests the customer must supply complete doors and front frames. The standard test procedure includes the following aspects:

1.Verification of the assembly of the door (component position and suitability, verification of potential interference with other components)

3.Closing force on seal. This force is measured by inserting a strip of smooth paper 20 mm wide with an attached weight of 20 g between the door and the door seal and then opening the door with a dynamometer. The closing force is recorded when the paper falls. The closing force on the door seal is a nominal value only which cannot be defined as a part of the contractual specification, as its measurement is affected by external factors beyond our control (e.g. correct positioning of counter supports in relation to production tolerances of other components of the oven structure, tolerances of door seals, tolerances of hinge position in door, production tolerances of individual door components). The level of force measured depends also on the manner of the closing operation (if it is gentle, with the door being held, the values are normally lower than those measured with a more firm, decisive closure). Which is not to be considered a production fault as it is related to positioning of the normal interplay of the components.
Alternative method includes dedicated equipment constituted by advanced frame provided with a dynamometer on which it is possible to assemble door and hinges only. The dynameter is aligned with the seal contrast position with the door, it measures the closing force provided by the hinge.

4.Peak force in opening (after detaching from door seal). It is the peak value obtained when measuring the force during the initial door opening phase. It can be considered a substitution for the test described at point 3 when the complete oven is not available and the measurement is made with the door fitted on a test rig, considering the same conditions as above. Nuova Star developed an advanced equipment with an on-board torsiometer that allows to measure the torque provided by a single hinge in opening and closing phase. The date can be exported, analysed and shared with the customer.

5.Stability of the door in the grill position.

6.Force in moving to a balanced position (the force required to move the door to approx. 45-50°).

7.Force in closing the door from its max. open position.

8.Force in closing the door from the grill position.

9.Dynamic (time and acceleration) of the door in presence of dampening system.

Structural tests have the aim to validate the system in terms of strength and robustness, Nuova Star standard foresees two kind of structural tests:

Static tests. These tests are carried out by placing a load of 50 kg in the centre of the door for 30 seconds and verifying the opening angle and the closing force after the test to see if there are any weaknesses. The tests are carried out with the door fixed to a rigid structure and these are verified on sample ovens supplied by the customer. Where this is not possible the tests are carried out on a test rig and the angle is measured on the hinge after dismantling the main spring. After the first test a second test is carried out where the weight is increased gradually to establish the maximum weight which, when applied to the centre of the door, limits the deformation of the opening angle to within the tolerated limits (less than 90°).

Dynamic tests. These tests consist of applying an additional load of 2.5 kg to the handle and subsequently opening the door three times in succession, dropping it from an angle of 25° to fully open. At the end of the test the opening angle and closing force are verified to determine any weaknesses. Tests are carried out on a door fixed to a rigid structure and then verified on sample ovens supplied by the customer. If this is not possible the tests are carried out on a test rig and the angle is measured on the hinge after dismantling the main spring.

Reliability tests have been designed to validate the hinge capability to prevent any kind of deviations in terms of performances taking into account the different environmental conditions in which the hinge can operate.

Cold testing. This is carried out on hinges mounted on doors supplied by the customer and fixed to rigid structures. The frequency of opening and closing the door is about 20-25 cycles per minute and 5-10 cycle per minute for damped systems. A rigid arm is loosely fixed to the door. The maximum opening angle of the door is controlled by the maximum opening angle of the hinges. The test duration is 30,000 cycles, where one cycle consists of one opening and one closing of the door. Every 5,000 cycles (or other interval selected) measurements are carried out on the force exerted. The test is considered to have been passed if the noise level is low and the hinges primary function is still available. If a loss of force of up to 20% of the initial values and an increase of up to 2° in the angle of opening are found, these are considered acceptable and within tolerated limits.

Hot testing. This is carried out only on sample ovens supplied by the customer. The test method listed above in point 1 is applied, alternating the cycles of door opening with cycles of heating the oven to its maximum temperature. A heating cycle is carried out with the doors closed for two hours after which 1,000 cycles of opening and closing ensue, after which there is another cycle of heating and so on until 30,000 operations have been reached. After every 5,000 cycles (or other selected interval) the force exerted is measured. The test is considered to have been passed if the noise level is low and the hinges continue to function. If a loss of force of up to 20% of the initial values and an increase of up to 2° in the angle of opening are found, these are considered acceptable and within tolerated limits.

Tests on hinges at high temperature. This test is similar to cold testing. Before being tested the hinges are heated in an oven to 115° for 100 hours and then tested. The test result is considered positive if the hinges continues to function, even if they are noisier and there has been a decrease in force of up to 30% from the initial values.

The standard process will provide a maximum defect rate of 300 ppm, without considering faults caused by packaging or transport. Any fault rate below this must be agreed at the first phase of the development.

Standard packaging consists of boxes containing 40 pieces. Alternatively, it can be increased to 870 pieces per box at a lower unit price. The products in their packaging can be stored in dry locations in temperatures ranging from -15° up to + 50°C.

In presence of any kind of specific qualification which requires customized testing activity, the customer should share with Nuova Star the requirement to be satisfied from the hinge system in its own application and the derived validation end verification methods at the early stage of development.